This is the Summer 2019 issue of Full Speed Ahead, San Francisco Bay Ferry's quarterly newsletter. You can sign up for email notifications of new issues or pick up a copy onboard the ferry.

The WETA Board has authorized a trial run of summer Richmond weekend service through November 3.  Staff will use information from the pilot program this summer to assess the ridership and consider opportunities for continuing the summer service in future years.

We will offer five departures in each direction on Saturdays and Sunday in the months of August, September, October and the first weekend of November.

All service will operate between the Richmond and downtown San Francisco Ferry Building terminals.

There is free parking at the Richmond Ferry Terminal and great bicycle and pedestrian access via the Bay Trail. More information on the service can be found at sfbf.mobi/richmond.

Vallejo ferry commuters are all too familiar with the perils of popularity.

Ferry ridership has boomed in recent years, putting a strain on our fleet and passengers during peak commute times. At certain departure times in the morning and evening commutes, there has regularly been a chance that passengers would get left behind. This growing demand led WETA to develop a program to expand our fleet, including a push to build bigger boats to meet the growing demand for services.  This push resulted in initiation of a project to construct three 445 passenger ferries – the biggest boats in our fleet to date – several years ago.

The first of these 445-passenger ferries, Pyxis, was placed into Vallejo service on March 1. Two more identical ferries, Vela and Lyra, are due within the next nine months.

Pyxis immediately relieved the Vallejo commute crunch on the runs to which it was assigned – usually the 7:45 a.m. and 4:30 p.m. departures. This was followed by a schedule tweak in late April that moved the 5:15 p.m. San Francisco departure to 5 p.m., helping to balance the evening loads. As a result, there hasn’t been an evening leave-behind due to capacity issues on the Vallejo route since the end of April.

The arrival of Vela later this summer will further address crowding issues, especially around the 7 a.m. Vallejo departure. We anticipate that ridership will continue to climb over time and have plans to  further invest in expanding capacity and service frequency while remaining the most comfortable, relaxing commute in the Bay Area.

Peralta is as good as new after refurbishment 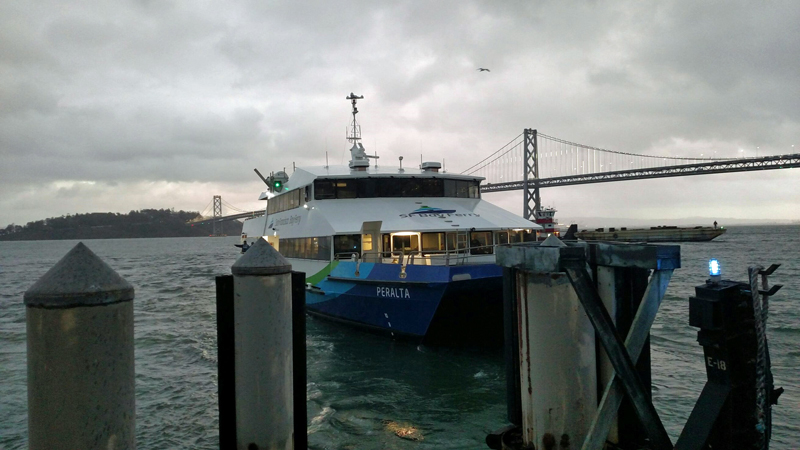 What exactly does a mid-life refurbishment entail for a ferry? Here’s what the team at Marine Group Boat Works in San Diego did for the Peralta under close supervision by WETA:

This is all in addition to normal engine replacement and scheduled maintenance and repairs.

WETA is working with the Port of San Francisco to establish a temporary terminal in Mission Bay to support new special event ferry service to Golden State Warriors games at Chase Center beginning in October 2019.

If all goes well, Alameda and Oakland fans will be able to ride San Francisco Bay Ferry across to the Warriors’ new home at Chase Center in the Mission Bay neighborhood of San Francisco. Tickets are not yet on sale, but additional information and a link to sign up for email updates are available at sfbf.mobi/chase-center-ferry-warriors.

WETA is working with the Port of S.F. on a permanent new ferry landing in the Mission Bay neighborhood as well that would support new regularly scheduled and special event services. That project is in the final permitting phases and will take approximately two years to construct.