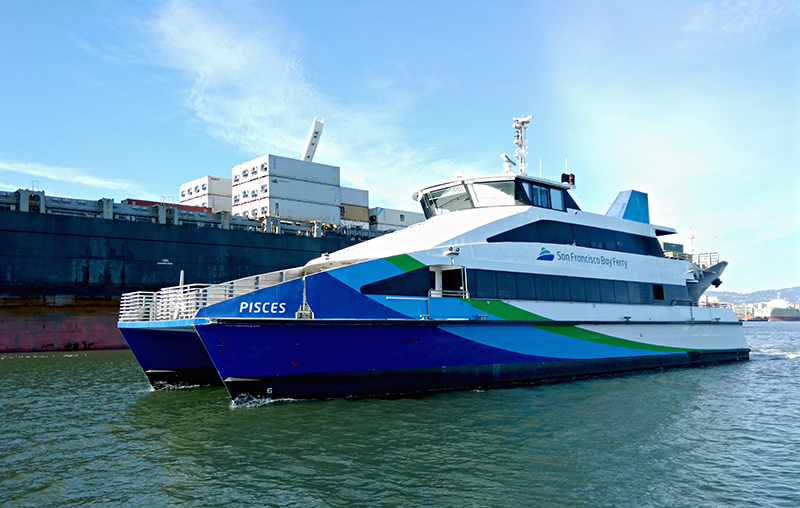 “WETA is committed to reducing emissions from its existing fleet while working toward a zero-emission future,” said WETA Executive Director Seamus Murphy. “Our agency has pushed the industry forward by building the cleanest new high-speed passenger ferries in the nation, and now we’re working to convert our oldest boats to this new standard.”

In September 2021, the WETA Board of Directors approved a $5.5 million project to upgrade the engines on the agency’s four Gemini-class vessels to significantly reduce emissions of air pollutants. MV Pisces was the first vessel to undergo the conversion. The conversion to cleaner engines on MV Taurus is currently underway at JT Marine in Vancouver, Wash. The full project is on track to be completed in 2023.

The vessels were built with U.S. Environmental Protection Agency (EPA) Tier 2 engines about 15 years ago. The conversion project replaces those engines with U.S. EPA Tier 4 certified engines, the cleanest available. Nitrogen oxide (NOx) and hydrocarbon (HC) emissions will decrease 73 percent and particular matter (PM) emissions will decrease 80 percent on each of the four vessels.

“The Air District’s support was critical to making this project real,” Murphy said. “We want to thank all of our local, state and federal partners for helping us realize the vision of a cleaner San Francisco Bay Ferry fleet.”

WETA pursued this project outside of regulatory requirements in its push to green its fleet. The vessels can be used on any of San Francisco Bay Ferry’s six routes, but are most frequently used in Richmond, Oakland, Alameda and South San Francisco. The new Tier 4 engines were manufactured by Germany-based MAN Engines.

In 2021, the U.S. EPA certified WETA’s four Hydrus-class vessels as equivalent to Tier 4 due to additional emissions reduction technology installed on the ferries. Delivery of WETA’s next new Tier 4 ferry, MV Dorado, is expected in May 2022. Construction is currently underway on an additional Tier 4 ferry, MV Delphinus. Two more Tier 4 ferries are under contract.

WETA has won grants to build two small battery-electric ferries to serve San Francisco neighborhoods including the downtown core, Treasure Island and Mission Bay. Construction on the zero-emission vessels is expected to begin later in 2022.

▶ Back to Media Center