Preparing for the Regional Ferry System of the Future

On June 5, voters in the nine Bay Area counties approved Regional Measure 3 (RM3), a measure that raises tolls on the seven state-owned bridges to finance $4.45 billion in highway and transit improvements. Tolls will increase by $1 in 2019, $1 in 2022, and $1 in 2025. RM3 funds a package of 35 projects and programs to relieve traffic and enhance public transit in bridge corridors.

RM3 will provide the Water Emergency Transportation Authority (WETA) with $300 million for capital projects and up to $35 million in annual operating funds for expansion. WETA will use RM3 funds to build new vessels and terminals, enhance service on existing routes, and launch service to planned new locations such as Berkeley, San Francisco’s Mission Bay, Redwood City, and the City of Alameda’s Seaplane Lagoon.

RM3 funding is a major advance toward realization of WETA’s 2016 Strategic Plan, which provides a 20-year vision for an expanded and comprehensive regional ferry system.

The Bay Area transportation landscape is witnessing unprecedented change due to economic growth, aging infrastructure, and outdated equipment. Ferries are an important part of both the near- and long-term solutions, which is why WETA is planning for a system that seamlessly connects cities in the San Francisco Bay Area.

WETA has been operating ferry service under the “San Francisco Bay Ferry” brand since 2012. Since that time, WETA ridership has increased 94 percent, with more than 2.7 million riders annually on four routes serving the cities of Alameda, South San Francisco, Vallejo, Oakland, and San Francisco. Current peak-period occupancies on WETA services average above 95 percent on most trips, with Vallejo and Harbor Bay services reaching capacity during peak times. 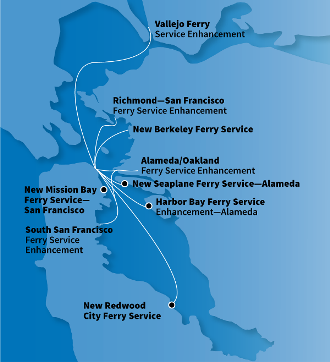 To address this rapid growth and to prepare for the regional ferry system of the future, WETA has been modernizing and expanding its fleet, investing in infrastructure improvements, and planning for new service:

WETA’s Strategic Plan provides a 20-year vision for a comprehensive regional ferry system that includes more frequent service on existing routes, establishing new routes, and developing new services. At full buildout, the Plan calls for a fleet of 44 vessels, 16 terminals, and 12 service routes. During peak periods, departures would be every 15 minutes in the highest demand locations, and with 30-minute frequencies at all other terminals.