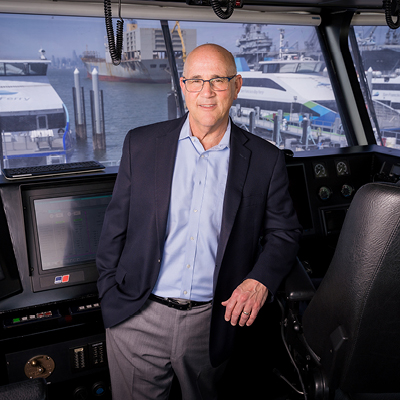 "Building a world-class ferry system for the Bay Area is vital to solving regional transportation issues and spurring economic growth," Mr. Wunderman said. "I’m so grateful to Governor Newsom for his confidence in reappointing me to this important position and for supporting the continued expansion of clean, reliable ferry service throughout the region. I cherish the opportunity to continue to work alongside my colleagues on the WETA Board, and with the WETA staff."

Mr. Wunderman has been the President and CEO of the Bay Area Council since 2004. He was senior vice president of external affairs at Providian Financial Corporation from 1997 to 2004, chief of staff in the office of the Mayor of San Francisco from 1993 to 1995, and vice president and general manager at Norcal Waste Systems, Inc. from 1987 to 1991.

"WETA is lucky to have such an energetic advocate for ferry service as its Chair," said Seamus Murphy, WETA’s Executive Director. "Jim has been such an effective catalyst for improving the quality of life in the Bay Area, and WETA is fortunate to have him as a champion. San Francisco Bay Ferry service has made great strides under his leadership and we are looking forward to making more in the years to come."

Since Mr. Wunderman joined the WETA Board in 2015, the agency has added new service to Richmond and Alameda’s Seaplane Lagoon Ferry Terminal. The agency’s fleet grew by four vessels during that time and ridership increased an average of 13% per year, making the ferry system one of the region’s fastest growing transit systems. During the COVID-19 pandemic, Wunderman led the approval of WETA’s Pandemic Recovery Program. Under the Program, San Francisco Bay Ferry became the first Bay Area transit agency to bring back full pre-pandemic service and a regional leader in the effort to incentivize transit ridership during pandemic recovery. Wunderman has also helped guide the next phase of ferry expansion opportunities to Berkeley and Redwood City, along with new service to emerging San Francisco neighborhoods on Treasure Island and in Mission Bay, where the agency will operate the nation’s first high-speed, zero-emission, battery electric ferry network.

The WETA Board of Directors consists of five members appointed by the Governor and state legislators. Appointees serve staggered six-year terms. The Board of Directors is responsible for overseeing and directing the activities of WETA, the agency that provides San Francisco Bay Ferry and that is responsible for coordinating large-scale emergency water transit when called upon.

▶ Back to Media Center