Reduced Schedule in Effect Due to 'Shelter in Place' Order.
Learn more >> 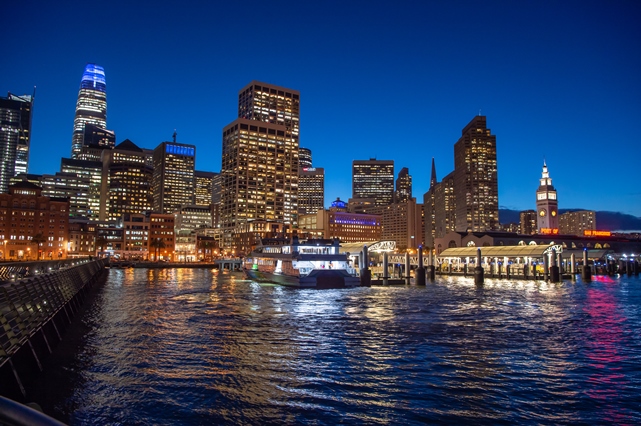 “Right now it is simply too difficult for many people to commute in and out of San Francisco,” said Mayor Breed. “Our population and our economy are growing. We need to make sure that we continue to invest in our transportation infrastructure to break the gridlock, and this includes expanding our ferry service throughout the Bay Area.”

“Our state must be aggressive in investing in our transportation infrastructure during a time when people are commuting long hours due to our housing crisis,” said Assemblymember David Chiu. “With a new governor and an extraordinary budget surplus, now is the time to make ongoing investments in transportation and emergency infrastructure.”

“San Francisco Bay Ferry service is growing with new routes and more passengers than ever,” said Nina Rannells, the executive director of WETA. “These new gates in downtown San Francisco increase our capacity and represent a major upgrade to our busiest terminal. This is a huge milestone for this project and for the growth of WETA’s ferry service in the Bay Area.”

“We are welcoming more people by ferry to our waterfront each year and expect that number to increase,” said Elaine Forbes, Executive Director of the Port of San Francisco. “The Port is planning for future growth and making sure all waterfront projects, including the downtown San Francisco Ferry Terminal Expansion Project, are built with consideration of the latest sea level rise forecasts and designed to remain functional after a major earthquake, while also making sure our shoreline is enhanced for the thousands of people that enjoy it each day.”

The existing Gate E will be rebuilt over the next year as work continues on a new public plaza at the site. The public plaza will have new amenities such as weather-protected canopies, an extension of pedestrian promenade areas, and other public access improvements. The new gates and amenities will significantly improve waiting and queuing conditions for existing riders and expand the space available for WETA to stage emergency water transit services in the event of a regional transportation disruption or disaster.

WETA began project construction in 2016 and the full project is expected to be completed in early 2020. The Project design team is led by ROMA Design Group. Power Engineering Construction is the general contractor for the project and Jacobs Engineering serves as the construction management firm.

In January, WETA launched new San Francisco Bay Ferry service between Richmond and San Francisco. The Port of San Francisco is leading a citywide effort with WETA and other partners to build a ferry landing in the city’s growing Mission Bay neighborhood.