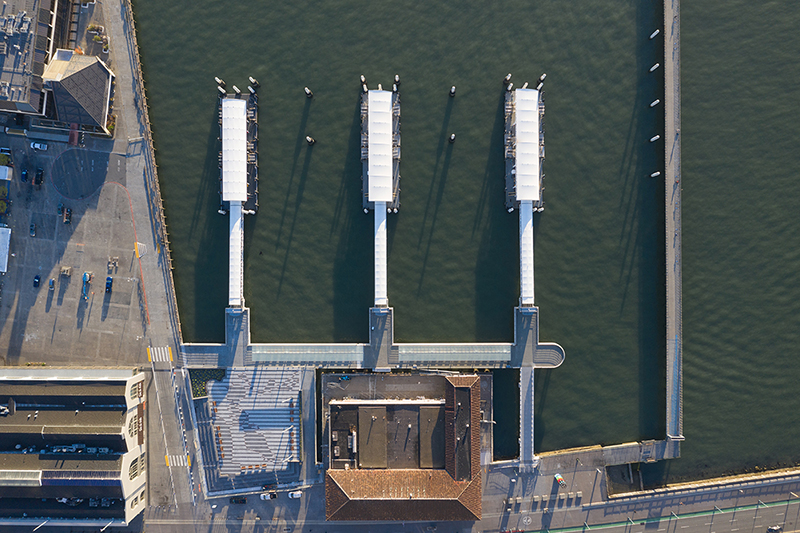 “The expanded ferry terminal and plaza is a creative project that serves the transportation needs of our city and provides an important public space along our waterfront," said Mayor Breed. "This project was years in the making, and thanks to the continued efforts of the Port and the Water Emergency Transportation Authority and the support of our state and federal partners, San Francisco can count on these new facilities for decades to come.”

Two new ferry gates (Gates F and G) opened in December 2018 and February 2019, respectively. The refurbished Gate E opened in February 2020. Construction on the public plaza at the ferry terminal was recently completed. 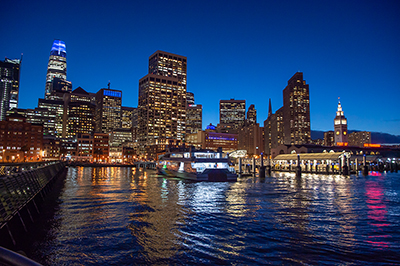 “We’re working to build a world-class ferry system in the Bay Area. Downtown San Francisco is a critical hub for that system, now and into the future,” said Jim Wunderman, chair of the WETA Board of Directors. “This project is an enormous accomplishment for WETA, the Port of San Francisco and the entire Bay Area. It represents a huge leap forward for our ferry capacity and emergency response capabilities, and it also happens to be a really gorgeous space.”

WETA is charged with two missions: expanding Bay Area public ferry service and coordinating emergency water transit in the event of a disaster or major event affects transbay transportation. This project furthers both goals by increasing maximum capacity at the ferry system’s most used terminal and providing a large staging area for emergency use.

“I’m thrilled that the Downtown San Francisco Ferry Terminal Expansion Project is opening,” said Senator Wiener. “It’s important, sustainable transit infrastructure that serves the Bay Area, and the new plaza a great way to create more useable open space in our downtown core. Thank you to WETA for their tireless work on this project and for being such an integral part of our Bay Area transit infrastructure.”

“Ferries are one of the most cost-effective ways for us to reduce traffic congestion and quickly address our transit needs,” said Assemblymember Chiu. “Today's opening paves the way for a world class water transit system in the Bay Area.”

“The completion of this project is a magnificent capstone on a decade of serious and smart investment in WETA’s ferry system,” said Nina Rannells, WETA’s executive director. “In the last decade, we’ve built seven new ferries, opened five new or expanded terminals including this one, built two major operations and maintenance yards and charted the future of ferries in the Bay Area. With this project complete, we are ready to tackle that future and grow ferry service even more. On behalf of WETA, thank you to the Port of San Francisco, our strong state and federal advocates including Senators Dianne Feinstein and Kamala Harris and Speaker Nancy Pelosi, as well as all of our partners for making this project a reality.”

“The new ferry plaza and ferry terminal expansion are great new additions to our waterfront that improve water transportation while also improving our City’s emergency response efforts,” said Elaine Forbes, executive director of the Port of San Francisco. “A testament to strong collaboration and partnership between Port and WETA staff, the new facilities are forward thinking and designed to withstand projected sea level rise and ensure that we can all enjoy these facilities for decades to come.” 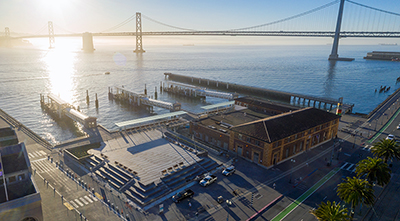 “Effective and efficient transit is essential for the post-pandemic recovery of the Bay Area economy,” said Metropolitan Transportation Commissioner Chair and Alameda County Supervisor Scott Haggerty. “To squeeze maximum service out of smaller budgets, MTC is working with WETA and the other transit agencies to help coordinate their systems to make sure workers and employers across the region have both the mobility they need and the quality of life they deserve.”

WETA began project construction in 2016. The 13,000-square-foot plaza was built over a lagoon just south of the historic Ferry Building. The new passenger floats were built off of a newly constructed promenade connecting the ferry gates to the plaza and the Embarcadero. There is a separate passenger bridge on the south end of the project to maximize access to and from the terminal while providing future flexibility for rehabilitation of the Port of San Francisco’s Agriculture Building, an historic landmark.

The project was designed to withstand projected 50-year sea level rise due to climate change and includes adaptable design features that would defend against rising tides through year 2100, setting a strong example of how the Bay Area can proactively meet the challenges to come while building near shorelines.

The project design team was led by ROMA Design Group. Power Engineering Construction was the general contractor for the project and Jacobs Engineering served as the construction management firm.