Special Schedules and Safety Measures In Place Due to COVID-19 >> 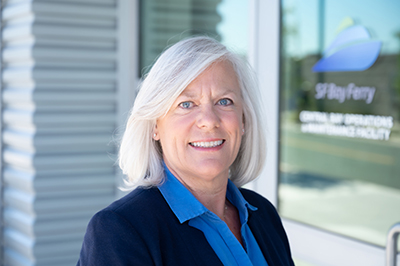 “Nina’s vision for what ferry service could be in the Bay Area has never wavered, and her steady, strong leadership of WETA has made that vision reality,” said Jim Wunderman, chair of the WETA Board of Directors. “From the very beginning, Nina had an incredibly difficult task. She met the moment repeatedly, and the Bay Area is better for it.”

Rannells’ last day at WETA will be January 31, 2021. The WETA Board of Directors is conducting a nationwide search for her successor.

Rannells managed WETA’s finance and administration department for three years before being named executive director in March 2009. Prior to that, she worked at the Metropolitan Transportation Commission and Golden Gate Bridge, Highway and Transportation District for a combined 16 years.

“Leading WETA has been an exciting exercise in start-up government, and I feel so blessed to have been able to lead the agency from its infancy to now,” Rannells said. “Every time I ride one of our ferries or visit our facilities or hear from happy passengers, I am so proud of what we’ve accomplished. WETA is now an integral part of the Bay Area's transit infrastructure and future, and I am ready to chart the next phase of my life with family and friends.”

The California State Legislature created the San Francisco Bay Area Water Transit Authority (WTA) in 1999 and tasked WTA with planning new and expanded ferry service. Rannells joined WETA in 2006. In 2007, WETA was created, both replacing WTA and adding the emergency response element to the agency's mission.

At the direction of the Legislature, WETA developed a plan to absorb ferry services then run by the Cities of Alameda and Vallejo. Rannells was named executive director in March 2009, just three months before the transition plan was due. Rannells worked swiftly to settle ongoing disputes with the cities to ensure a smooth transition.

The transition formally took effect in 2012 with the launch of the San Francisco Bay Ferry brand, under which the existing Vallejo, Alameda/Oakland and Harbor Bay routes joined with a new South San Francisco route. As WETA built and rehabilitated vessels and opened its maintenance and operations hubs, ferry ridership boomed, more than doubling in the last eight years.